Are you an ecologist that fell in love with math modelling in your quantitative classes? Are you a math or physics major yearning to transition to a career in the life sciences? Want to develop models of host-parasite dynamics as part of a multidisciplinary team working on important applied problems at the human-wildlife-pathogen interface? If so, you might be interested in applying to one of the following positions:

Students will join the world-class Ecology graduate program at the Odum School of Ecology, and may also be eligible for admittance to the NSF-funded Graduate Research Training program in Interdisciplinary Disease Ecology Across Scales or the Integrative Conservation Program at UGA.

Prior experience of working with mathematical models is highly desirable. Interested applicants should send a cover letter indicating their research and training interests, and a copy of their CV, to rjhall “at” uga “dot” edu. Applications from students from diverse and underrepresented backgrounds especially welcome!

A new paper led by Altizer lab alum Ania Majewska, and co-authored by Richard and former REU student Anna Schneider, was just published in Proceedings B. Ania uses a neat combination of field, lab and modeling approaches to show that the super high infection prevalence of the protozoan OE in monarchs can be explained by multiple transmission modes. You can read more about the study and its implications on this thread on Richard’s twitter feed.

We have many things to celebrate!

Cali received funding from the UGA Innovative Interdisciplinary Research Grant (IIRG) and Oconee Rivers Audubon Society for her work on behavior, infection and food subsidy in urban white ibis. Additionally, she successfully applied for an REU supplement to support Olivia Sieverts. She and Olivia are spending the summer in Florida watching ibis.

Megan also received funding from the UGA IIRG and helped write a President’s Interdisciplinary Research Grant to study the transmission of the parasite causing black gill disease in shrimp at the Georgia coast. Megan is spending the summer at the Skidaway Oceanographic Institute developing transmission experiments in the lab and the field.

Claire received funding to pursue an NSF Graduate Internship experience this fall, and has co-authored two recent papers: the first, led my Marlee Tucker and published in Global Ecology and Biogeography, demonstrates that birds move more in uniform landscapes, and the second, led by Drew Kramer and published in Ecology and Evolution, investigates the cross-scale dynamics of White Nose Syndrome transmission.

Richard published a modeling paper in Integrative and Comparative Biology linking resource intake to within-host dynamics and parasite transmission in heterogeneous host populations. He is excited to collaborate on an NSF EEID-funded grant lead by U. Arkansas’ Kris Forbes to investigate helminth-hantavirus transmission in Finnish voles; stay tuned for modeling PhD opportunities. He also got to go to Alaska for the first time and attend his first ornithology meeting!

In a new review paper out in Trends in Ecology & Evolution, lab member Claire Teitelbaum and co-author Thomas Mueller outline the patterns and ecology of nomadic animal movements. Nomads move in irregular patterns in both space and time, covering large areas but in a pattern that is non-seasonal and often unpredictable. These irregular movements are generally driven by resources that change unpredictably – but can also be associated with escaping from natural disasters and from parasites or predators. Nomadic movements can also take many different forms, from full-time nomads that move frequently over their entire lives to seasonal nomads like white ibis, which move nomadically during some parts of the year but not others, to irruptive nomads like locusts. The review also addresses the consequences of nomadic movements for populations, communities, and ecosystems. These ecological effects vary widely depending on the type of nomadic behavior; for instance, gene flow can both increase and decrease as a consequence of these irregular movements. Overall, nomads often shape the ecosystems in which they live, whether that is through disturbance or seed dispersal, so we conclude by arguing that – though challenging – conservation of this behavior is important for maintaining ecological functions. 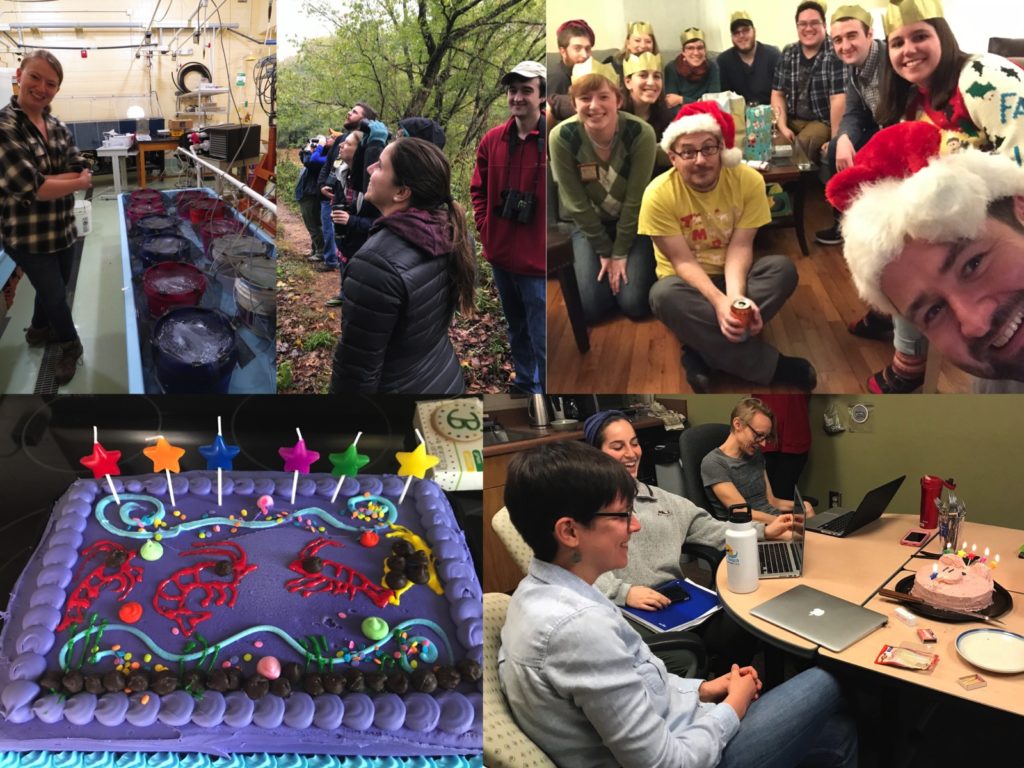 The lab website might have gone quiet for a few months, but there have been plenty of lab goings on!

The University of Georgia rolled out ambitious plans to improve water quality and recreational access at Lake Herrick, a beautiful green space on campus, but how will increased use by people influence the wildlife that calls it home? Following a letter detailing potential impacts on the site’s birdlife co-signed by UGA faculty, the National Audubon Society’s chapters in Athens and Atlanta, Richard worked with Ecology seniors in an Environmental Practicum class, and met incoming graduate students in the interdisciplinary GS-LEAD program, to discuss potential solutions. These meetings resulted in a report shared with the Office of Sustainability featuring recommendations and site improvements to minimize human-wildlife conflicts, including keeping some areas of the lake disturbance free, replacing perching and nesting structures used by swallows and waterbirds in the lake, and initiating discussions between the Oconee Forest Park and State Botanical Garden to develop a native planting plan around the stormwater pond.

Lab members Claire Teitelbaum and Richard Hall presented research at the Ecological Society of America 2018 meeting in New Orleans. Claire presented her study of linkages between animal movement and infection in the ungulates, which was recently published in Proceedings B. Richard presented some preliminary new work modeling the coupled dynamics of wildlife feeding and infection. Additionally, collaborator Ania Majewska presented her findings of drivers of high infection prevalence in sedentary monarchs, and we had our first PI meeting (and accompanying field trip) on our new project investigating the drivers and consequences of migration loss in monarchs. It was a pleasure to run into many old friends and colleagues, including Hall lab alumna Javiera Rudolph, who did her undergraduate research at UGA in 2013 and is now close to completing her dissertation at the university of Florida!

quantify environmental transmission rates of their protozoan parasite OE. Excitingly, she discovered substantial variation among monarchs in their visitation rates, which may point to the existence of superspreader individuals. As well as presenting her research at the UGA REU symposium, Chastity will present at an upcoming biomedical research conference, and her ambitious summer project has spawned a follow-up experiment! We’ll miss having her around!